I go unshowered* to the MFA. It makes me feel nostalgic (I went to the Museum School). Having dirty hair also let’s you judge the true demeanor of the gallery people. They’re all very nice, as is much of the art. This is a good thing in humans, less so in art.

I’m here for the Jedediah Caesar show which bears nothing in common with the images I’d seen on the MFA’s website so I feel a bit ripped off (I came to take a peak at *that* work; for what its worth the website has now been updated to reflect the actual content on display but I learn this only upon my return home). Because giant art museums make me feel as if I’m at Costco I visit only the Caesar show and the current offerings of the Linde Wing. Short visits to the MFA are another long-term habit dating from my years of free entry. I am also loathe to spend more than 2 hours at any institution, regardless of the price. My eyes gloss over and it’s like I have the flu: all intake and no cognition.

I first became aware of Caesar’s work at the 2008 Whitney Biennal. I loved his giant multihued resin block and, though I’d forgotten it, the monochrome sliced tile piece that you see in the video. Materiality and process are big in Caesar’s work: the process whereby he creates the materials for his own work. There are more tiled pieces at the MFA show with different hues and configurations. Caesar makes these by collecting objects, and, according to the MFA :preserving them “in a range of forms, including colored resin slices, impressions cast in clay, and raw assemblages.”

There are 2 parts to the Caesar show: the sliced tile pieces and a big unfired clay thingie. The clay thingie is awesome and has a wonderful name: /ALBATROSS/BADGERS/CHIMPS/DINO/EXTENSOR/FENCE/GRANITE HILL/HEAVENS/INSIGNIFICANT/LARK/MR. TUX/ORANGE PEEL/PURPS/RAMPA/SWINGLES/THIN SPOT/UPSHOT/WHITE KNIGHT/YELLOW PANT/ZIPPER/
Its like a Damien Hirsch title but more urgent and less pretentious. I have no idea what it means and yet it feels right, like listening to a neighbor sing in the shower when you can hear only bits of words but still get the rhythm. I think he may have mis-spelled “perps”.

When seen from the right angle the clay piece is sphinx-like in form. Like a sand sculpture it’s both static and transitory and is nicely activated by the sound of patrons’ footsteps as they cross the fancy wooden floor. As with the title, the mark-making feels urgent and fresh; too quick for imposed logic and so it’s the piece itself that provides it. You get a better sense (than with the tiles) of Caesar’s compositional and formal talent and they’re strong. There’s also something pleasingly primitive about it, like a Ziggurat or an Aztec altar (this is 2012, after all).

I’m less keen on the tiles. Some of them work and some of them don’t, in part because there are so many patterns and hues involved. I like the running floor-level border that encompasses the walls of the space (it has a cinematographic quality due to abrupt changes in hue and the time-based/chronological composition of its fabrication and assemblage). And I like the single red tile placed up high like a piece I once saw by Cornelia Parker that had something to do with giraffes. But I don’t like the arrangement of the remaining tiles. Their checkerboard patterning means there’s insufficient mass to create discrete volumes and they remind me instead of the alternating blacks and whites of tiled kitchen floors. The tiles feel quickly done and under-edited. Nonetheless I’m excited to see his work at the DeCordova in a few weeks.

The Linde Family Wing for Contemporary Art
I’d like more failures in the Linde show. Not intentional ones but instances of highly complex art that doesn’t “work” according to existing canons and therefore engages. Everything does work and feels extremely safe: guaranteed to engender no anxiety or insecurity in the MFA-going public. Most of it also feels highly familiar, coming from artists recently shown at the ICA (where Senior Contemporary Curator Jen Mergel used to work), the List, and past Biennials. There’s even an El Anatsui piece from his wonderful survey at Wellesley. Stripped of its context and on its own it seems mostly decorative, like a lot of the work. A bower bird would love this show. 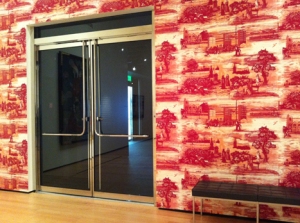 It’s a toss-up for favorite between Cerith Wyn Evans’ conceptually engaging chandelier and the wonderfully named Timorous Beasties’ equally wonderful wall paper (go Glasgow! and see image at right). Fred Wilson’s mirror comes in third, followed by Matthew Day Jackson’s Bockscar, and the Felix Gonzalez-Torres glitter curtain. There’s not alot of intellectually demanding work so I go for the joyful glitz and am glad for the MD Jackson as I missed his show last year. I just wish there was something to sit on as I get confused between the decorative art and the furniture and feel awkward about asking (or mis-sitting).

Petty food note. The “taste” cafe could stand improvement. They have no clue how to make tea (one of the 4 beverages they offer) and the food offerings are scant. I can’t help but compare it with the stellar cafe of the Wellcome Collection in London. The big black and yellow wall painting is nicely decorative (since I’m not sure what its letters say I can’t pass further judgment. Is it a social commentary on NY taxis? Or bananas?? Conceptual art aimed at the great apes? They could swing from the chandelier while pelting visitors with useless tea bags). I mention this only as the cost to enter the MFA is $22.