The first time I made butter it was dead easy except I got so excited I ended up cutting my finger on the blade of the food processor. (So dead painful too, but I did manage to keep the drips out of the bowl). 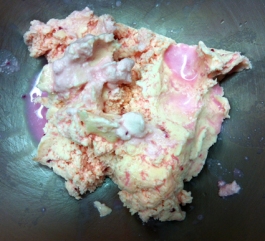 beet and orange butter, prior to "washing". by the author

I made red-pepper flake butter and also pink Himalayan salt butter. Again, really easy, but you have to wash the butter thoroughly and then squeeze all of the moisture out so it doesn’t start to go sour after a few days. Butter washing and squashing with a bandaged hand doesn’t work too well so the butter lasted only a week.

Making butter is a bit like working with plaster, except there’s less of a race against the clock. Plaster always astonishes me: its like magic the way it goes from liquid to solid, but usually magic with malevolence mixed in. I’m often stuck with a good chunk of hardened left-overs which the plaster fairies/angels/devils caused to seize up part-way through my project.

Not so with butter. The stuff that doesn’t solidify in the churning process remains as butter milk, which is surprisingly tasty. You can drink it or bake with it and revel in the duality of its nomenclature.

Franz West works with plaster and papier-mâché, or, possibly additionally the innards of tortured minotaurs, or the things left standing once a planet has condensed to pure dark matter. I love his work and defy anyone to argue the contrary. He’s one of several sculptors whose work I group together: Rebecca Warren, Siobhan Hapaska, and Rachel Harrison are additional names that spring to mind, although only some of Hapaska’s work fits my categorization: eccentric blob(s) coupled with thin rectilinear hard things. The contrast in materialities reminds me of the butter/butter milk divide and there’s an inherent violence and joy in the objects that reminds me of my butter blending mishap. West’s pieces can also have the look of giant mounds of tufted fat: the kind you get when you start playing with the trimmings of some uncooked beef.

I’ve got some partially made blob sculptures that I need to get back to. I’d love to say I’m going to make them out of giant blocks of beef fat and keep them in a see-through fridge, but perhaps this is best imagined. And I’m going to make more butter. Formaggio Kitchen has crystallized violet petals for sale: I think I’d like to use some of them with some really really dark salt. Maybe I’ll finish the blob sculpture that’s got speakers in it and paint it purple and black. Or maybe I’ll do Himilayan pink salt again with crystallized rose petals; its almost Valentines.

Butter really is about the fat. The fabrication is a simple process: take some nice heavy cream and agitate it. Shake it or beat it or blend it til you’ve made whipped cream* and then keep on going. Suddenly (see magic processes in paragraph 3) from the one substance you now have 2: the cream is replaced with solid butter and the liquid butter milk. Once you’ve stopped marvelling ***and the blade has stopped spinning*** remove the solid lump of butter. Wash it in cold water and then squeeze all of the liquid out. This is very important as any remaining liquid will sour. You can work in any flavorings at this point. I’m not sure but I imagine if your flavoring can rot it will; the butter will not preserve it so plan accordingly or use the butter quickly.

*a blender or other electronic device is absolutely not necessary to make whipped cream. Put some cream in a container with a tight cover, leaving plenty of room at the top. Shake it til you no longer hear the liquid sloshing around and you have whipped cream. It takes a minute or two. Apparently you can keep on shaking and eventually make butter, but I’m too much of a wuss.

If unicorns are the source of rainbows (see previous post) then eggnog must come from ferrets. If not ferrets then some other sort of small insidious mammal. (Minks, for instance. I hear they smell, too, although I may be confusing them with skunks). Ferrets are small, cute, furry, and bad tempered. I can personally attest to the fact that they bite. They are possibly also lazy, but this may be pure fiction on my part.

Eggnog has the viscosity of oil; thick enough that you could almost pinch it off
midstream, but then what would you do with the handful? Miniature Franz West replicas perhaps?  Or maybe replacement teeth  . . .

Teeth made from eggnog sounds conceptually engaging: a twist on the idea of the box filled with the sound of its own making: teeth formed from the material of their own destruction. There used to be a dentist’s office in downtown Boston with a giant plaster tooth in the front window. The tooth actually looked like a lesser West at an earlier transitional phase. The first ingredient listed on a carton of Garlelick Farms Egg Nog is “high fructose corn syrup”. 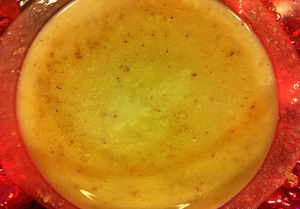 Eggnog is not the same as the (in my opinion) coyly named “milk punch”*. No eggs for one thing, or cream (but, yes, still booze). And you can’t buy it pre-made. I hear backbar has a nice version and I had a yummy one this summer at the bar at HIX. Milk punch has been around for several hundred years, as documented in recipes such as the one from the 1785 edition of  Mrs.Elizabeth Price’s The new, universal, and complete confectioner; being the whole art of confectionary made perfectly plain and easy. The frontespiece promises directions for “milk punch that will keep twenty years” but the actual recipes (one for “milk punch” and another for “milk punch for present drinking”) guarantee potability for only “ a fortnight’s time”. Both recipes call for large amounts of water, milk, lemon juice, brandy, and some sugar. I am not sure whether the 20 year promise is a mis-print or a case of false advertising.

The Germans have a variant of eggnog made with beer. I find this repellent but not surprising. Germans make very good cameras and bridges, but food: eh, not so much, to paraphrase Borat. Their drink is called Biersuppe and it apparently contains beer, cinnamon, egg yolks, sugar, milk and bits of bread. The proud Germans have made a number of videos detailing its fabrication (including the addition of liverwurst!!!) revealing it to be slightly less horrifying in appearance than pruno (prison wine). Even weasels shudder at the burden of association.

* Other relatives include possets and syllabubs