I got a beer-making kit this Christmas and have run out of excuses for not using it.

Making beer (and I’m assuming most alcohol) involves an ordered set of stages similar to those immediately preceding and following its consumption: 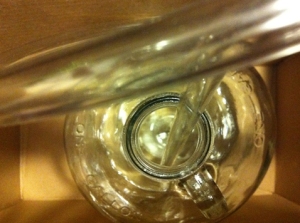 The beer kit comes in a nice brown box that reveals none of its content (I understand printed pornography once arrived similarly concealed). This means that, prior to opening, the imagination may run rampant (again, see prior reference). To wit: inside is my magic beer kit. There’s a large container and some magic powder; you put the powder in the container with some water and then you have beer a bit later. Or, possibly: inside is my beer unicorn. I will keep it tethered in the back yard and milk it every night for pints and pints of delicious unicorn milk stout.

Predictably it is more the former than the latter and the first step is to sterilize everything (see “fear” from list above) and then do something several times with the rather large bag of grains as well as the chestnuts which you have remembered to purchase, roast, and peel in advance (see “hard work”) after which you may play with the alchemical pipes and rods and read up about “wort” for a week or 2 (see “relative relaxation”). Finally after another few weeks you get to enjoy the fruits of your labor (or shake your tiny fist if something has gone amiss: see “euphoria/misery”). The beer kit is from Brooklyn Brewshop. I will report back. If you want to snoop ahead you may read the instructions here.